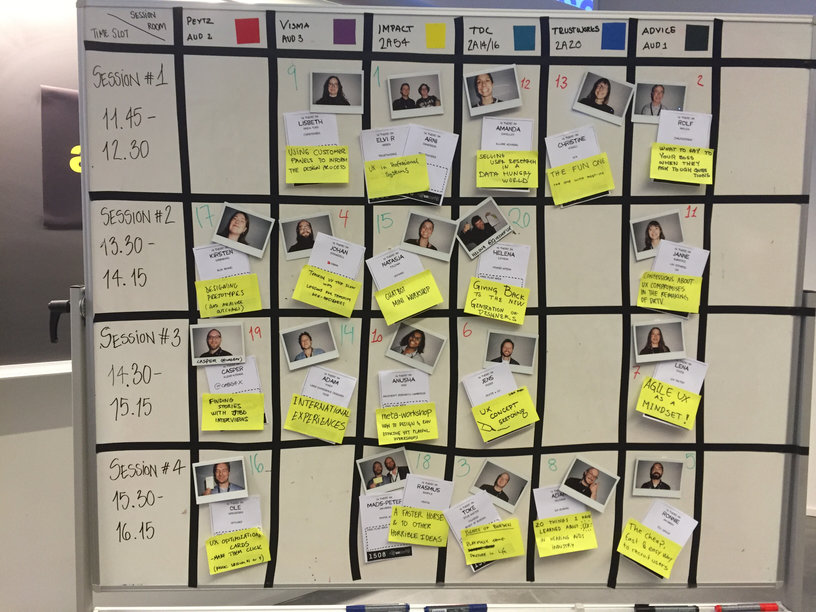 What is UX Camp?

UX Camp is an event that gathers UX’ers in an user-generated conference form. That means it has a self-organizing structure. Participants influence the event by sharing their knowledge in talks and workshops with other camp participants

Each year it is held in different, several locations and I decided to join the one in my home city Copenhagen, where it is hosted at the IT University Copenhagen.

To get a ticket you have to participate in a ticket raffle – so there is no guarantee you will get in. I was one of the lucky few hundred participants that got chosen in the ticket raffle. After that, I could purchase my ticket to save my spot and mark it in my calendar.

Even though the base of the camp is self-organized, there are also different speakers.

On the first day of the camp – Friday, there were 2 speakers – Kasper Friis and Andreas Hjort Bundgaard.

Kasper Friis talked about his insights in design sprints and why he\’s decided to ditch them. He also presented what he does instead. Definitely interesting insights that stirred conversation with other designers after.

Andreas Hjort Bundgaard presented his innovative project that involves detoxing from the internet. At first, he asked the audience to stand up and instead of a casual ice-breaker, he indulged the audience to raise our hands and repeat “I abandon you Facebook”, followed by that Instagram, Snapchat, etc.

“The internet runs on computers. computers are turning complete machines, that is, their core functions can be re-written. the internet can still be radically redesigned.” (for more look into their website: http://www.jacobremin.com/howtoquit/)After the two talks, there were free beers and networking, and some music.

Next day, Saturday, started with a keynote speaker – Jared Spool, who is an American writer, researcher, speaker, educator. He is also an expert on the subjects of usability, software, design, and research. He has been working in the field of usability and design since 1978 before the term “usability” was ever associated with computers and is a founder of User Interface Engineering, which is the largest usability research organization of its kind in the world. Jared in his speech was touching different interesting questions. Such as: is there a difference between UX and UI, and if so, how does that change how teams should operate? What is the relationship between product design and service design? How do we start preparing for what comes next? In his presentation, he was representing an actual example of a false missile alert and how that could have been avoided. Jared also represented Smith&Mosier design guidelines for designing UI software, that even though first had been written in 1986, and were created for black-screen computers, that had nothing but the text on them, are still very relevant for today’s world. Some of the principles: Minimal input actions by the user, Flexibility for user control of data entry.

After Jared’s speech participants were welcomed to come on the stage and present their sessions, that they would like to present to other participants. Sessions varied from workshops to depths of journey mapping and user research, and many others. Approximately 20 participants presented sessions, that were later altered to different rooms and time slots. Unfortunately, there are only 4 time slots, and 18 sessions, divided into different rooms, so had to choose carefully, as it wasn’t possible to attend every single one.

I attended different sessions and the one that resonated the most with me was one about the topic: How do we make sure we don’t design for average? That was presented by Mikkel K. from 1508. Mikkel touched different points, such as what is the average user, designing for the peak moments and how that can be 9x times more effective. I enjoyed his presentation and topics he touched and later stirred interesting conversations.

After the sessions, there was the last keynote speaker – Dana Chisnell, who is a Co-director of Center for Civic Design, and their goal is to make every interaction between government and citizens easy, effective, and pleasant. She was presenting different interesting examples of her work, and examples where the UX wasn’t at the best, such as one election in the USA where participants were confused about how to vote for their chosen candidate.

After the last keynote speaker the after-party was announced, that was held in a location nearby. This is where I went home, so can\’t tell more about it. 🙂 But was an amazing event, with lots of new insights, and looking forward to the next one!

I can recommend anyone interested in UX design to attend this Camp, to expend network and participate in interesting discussions and get new insights in the UX world from other fellow designers!